If you’re interested in finding out more or just have a question for us, we’re here to help

Lots of jobs are going to disappear because of automation. Sales isn’t one of them.

Lots of jobs are going to disappear because of automation. Sales isn’t one of them.

We have written before about the premature predictions of the actual Death of a Salesman. Similar themes emerged again during some recent ESI webinars that further explored the difficulties employers face in attracting, retaining and developing high-performing sales talent. Specifically, each webinar surfaced bigger-picture questions about Automation and the Future of Work generally and the impact on the sales profession in particular.

One of the reasons we find businesses with so many problems in the broad area of sales capability is the fact that they – and the world of employment generally – made two very big and very wrong calls when it came to their expectations of the impact of technology and automation on the sales role.

First off, the expectations themselves were proved wrong. Winding the clock back 10-15 years conventional wisdom effectively called out automation as the catalyst for the end of the sales role as a meaningful pursuit in business. People didn’t quite express it as bluntly as that, but the sense was that a whole range of smart, increasingly automated marketing & sales technologies would render any human sales resource redundant. Buyers could be educated, nurtured, and ‘scored’ online. They would arrive at their selected vendor ready to buy and the role formerly known as sales would simply become quasi order-takers if even that. Technology would be all-powerful, and we will be rid of those pesky salespeople forever. Wrong!

The second hit is a logical extension of this: it was precisely because of these predictions that organisations took their eye off the sales development ball. Quite logically, a role that is doomed to automation to the point of redundancy – and the people that perform it – clearly require no investment in terms of talent acquisition and development. If an organisation expects a role to be either a) redundant or b) entirely unskilled, that role hardly requires a fair if any share of the limited talent development budget. Better to spend the dollars on all this technology that will automate the role out of existence, eh? Eh…if we may permit ourselves some grammatical licence….Wronger!

Many employers today, therefore, face a strategic double-whammy when it comes to their sales function. The role isn’t going away anytime soon – more about that below – and, precisely because of all that technology, has become more instead of less skilled. That would be bad enough if sales talent development had continued even at old-world pace in the intervening years; but because it hasn’t, employers find themselves even further behind the curve.

Automation…Robotics…Machine Learning…AI. Play your own game of buzzword bingo whenever you have a chance. And there is no doubt that, just like industrial revolutions of the past, technology is rapidly and dramatically changing the workplace and the job roles and professions within it. One could argue that every single job will change over the coming years and some may even be made entirely redundant. But sales isn’t one of them.

Here’s why: the great marketing and sales technology stack did truly transform the world of buying and selling. Buyers especially come to their vendors better ‘scored’, likely better educated and perhaps better nurtured. But all of that automation has made the buyer more demanding not less so of their vendor. They don’t arrive ready to place orders: they arrive demanding an even more professional experience from the salespeople they encounter. They want their problems solved, their business understood, a partner they can do business with over the long term – not some bot that is programmed to take an order now.

The good news is that, yes, there is a technology – super-powered beyond all of our comprehension – that automates this experience in a way that most efficiently enables buyers to buy. That technology is called a brain. Only people have them. And the highest performing salespeople know how to use theirs.

It’s time to abandon this misplaced judgement that Sales roles will disappear with Automation. Invest in the professional development of your sales team to make the biggest impact to your business this quarter. ESI offers a programme which is ideal for sales teams working remotely or from a variety of locations. It enables individuals to get an overview of all of the core skills necessary to sell successfully and to deep dive into those modules where their personal skills need to be upgraded. It facilitates a standardised approach to selling that can quickly be implemented across the organisation. It also is highly motivational for sales professionals, improving their focus on driving their own sales performance.

ESI offers the definitive, digital solution to upskill your sales team. is the fact that they – and the 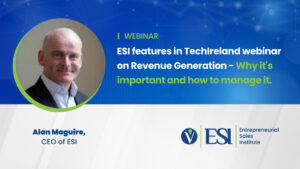 Stay up to date with valuable insights and advice by registering for ESI updates!